The VR audience today* is excited by games, stories that allow us to experience the world like never before, content creation platforms that feature tools where users can explore augmented creative freedom, and above all, by experiences that can be shared.

Outside of Tilt Brush and Unity’s Editor XR, and without more advanced content creation platforms like Unity, Unreal or Amazon Sumerian, working with VR can be a daunting task.

To date, I’ve experienced a number of Pixvana’s demos from the VRAR Global Summit in Vancouver, to their pop-up event this week in Los Angeles. At both events, their software demonstrated a platform for content creation unlike what I have experienced before. 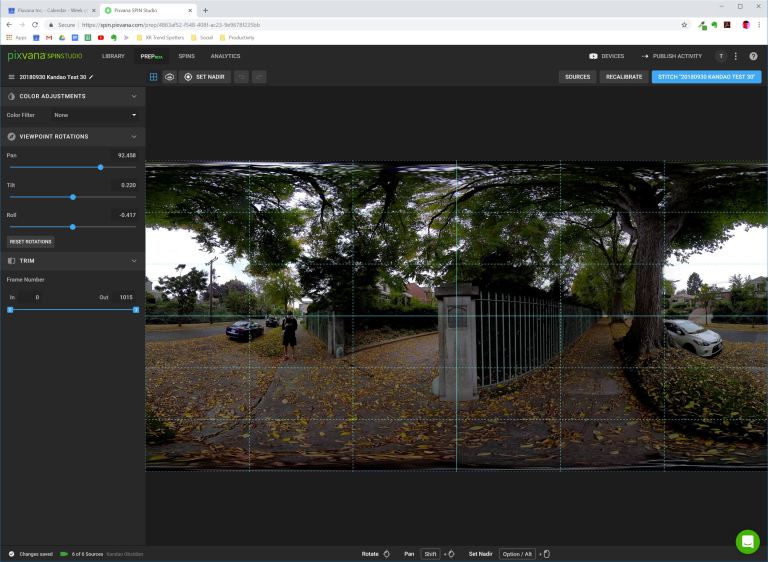 In less than 15 minutes, it’s possible to upload video from a phone or camera, to Pixvana’s editing suite for stitching, and then editing in Pixvana’s Spin Studio that can handle 8k resolution.

So what makes Pixvana’s editing suite different? It’s the first example I’ve encountered where users can edit their VR narrative, in VR, and it’s all cloud based. “You can cast from here to the headset,” said Beverly Vesella, Product Manager at Pixvana.

Both beginners and experienced editors can quickly combine media to create interactive stories with multiple videos, and then share it directly to a viewer who is using any device paired with a SPIN Studio account. SPIN Studio is compatible with the Oculus Rift, Oculus Go, Samsung Gear VR, Google Daydream and HTC Vive, covering the most popular hardware shipped on the market.

The demo I experienced was a soccer game with insane crowds pooling into the event, a packed stadium, and excited fans with each play. It was possible to choose between a location at the beginning of the event, a bird’s eye view or field level view during the event, and then to choose a viewing location further back or right on stage during the awards ceremony after the game- with replay optional. “You can experience it as someone in the experience, or as someone watching,” said Sean Safreed, Co-Founder at Pixvana.

Vesella showed that with just a few clicks, editors can easily add sound, pictures, logos, text and more while editing, all in VR. These can all be hot spot sensitive, meaning that as a user looks around, these added visual cues will only appear visible as a the viewer’s gaze focuses on a certain area.

The video Vesella demoed was shot on a camera with 6 lenses. “The first thing I’ll need to do is to stitch everything,” she said, and then to select which camera was used. When the image is compiled, it’s easy to make adjustments, and stitched assets are automatically saved in the same source folder to simplify file storage.

“The creative part was the easiest part of the project. It probably took 15 minutes all together,” said Vesella.

Pixvana has drawn the attention of some major players. Michael Scogin, VP, Late Night, NBC Entertainment Digital, runs strategic partnerships at NBC Entertainment. “On the TV side we wanted to see if we could do episodic 360 and 180,” he said, adding that YouTube was the main distribution point for their content. Their main focus is web delivery, with headsets as secondary, he said.

“We are tying to prove or show that you can drive an audience to this content,” said Scogin. NBC Entertainment is an advertising based business, and they want show that they can build partnerships and sponsors with this content, he said.

For advertising, as we learned with PSYOP, it’s reaching the most eyes that counts. With the projected economic impact of VR/AR technologies by 2020 (medium adoption) estimated at US$15.6bn, it’s critical that agencies wanting to thrive in digital must continue to experiment and create content in new media.

Even Netflix, the video streaming service that consumes 15% of global net traffic is looking at non-linear storytelling options, beginning with new episodes of Black Mirror in December.

Scogin said that it can be difficult to drive traffic to native apps, and marketing via HTC, Oculus, YouTube and PlayStation VR are better options. They are trying to find the right mix of how to distribute and integrate sponsors among other challenges. “Right now this is not a scale business, we try to sell it as a part of packages,” he said.

The VR/AR media space is incredible dynamic at this time as content creators seek new ways to reach and appeal to audiences in VR/AR. Hardware wars continue, with prices overall too high to attract mass adoption. So far software editing suites have targeted more experienced developers, until now.

Scott Squires, CTO, Creative Director and Co-Founder at Pixvana speaks to the diverse user base it can appeal to. “Cooking shows, mathematics, just about any type of subject matter,” he said.

“Businesses or colleges are using it to recruit… It can reduce pain and anxiety…. Training and education becomes a lot more interesting when you add interactivity,” said Squires. 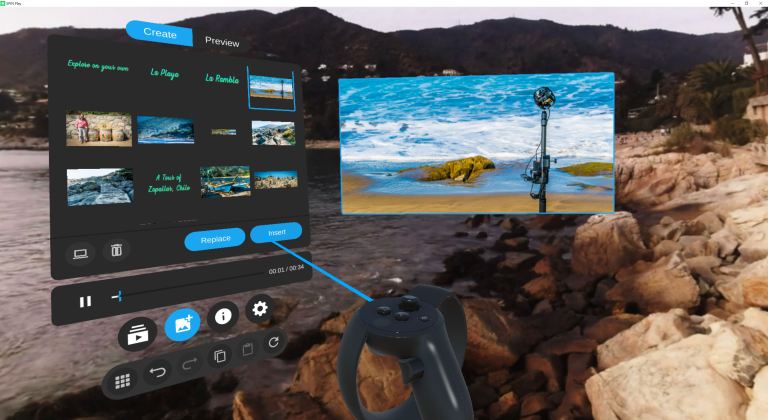 Platforms like this have huge potential to engage new audiences and to allow users to guide demand for what they want to see in content creation tools for VR/AR.

I can think of many applications from gamification of education (unlocking portals), offsite training, social media content sharing, navigating events like music festivals* and even improved UX (user experience design) on gaming platforms.

Current limitations include the ability to design new assets on the platform. I also wonder about the pricing which is currently on a case by case basis. Good news is that Pixvana plans to include options for analytics with Advanced View Analytics and Google Analytics Integration.

We’re all trying to learn about what works in VR/AR and what doesn’t, what engages and what content we should create. VR/AR can be a risky business with high costs involved in R&D and marketing. At the end of the day, it’s about understanding what consumers want, what software enables these demands, what hardware suits user requirements, and what platforms can deliver to meet commercial need. Pixvana is one to watch.

*Music festivals- if you’ve attended Sundance New Frontiers you’ll know the lines are long! How cool would it be to hop from one VR experience to the other in one space, with one headset. There are of course considerations like haptic or other sensory affects that must be considered per experience, but this can be easily accommodated for on the spot.