In a three-year deal, Atari lends its IP to ZED RUN’s digital horses, the up-and-coming Tamagothchi 10.0 of AR, VR and the blockchain. (Crypto)Kitties might not be the only fad to follow as these digital horses are taking on NFT gaming.

What if you could combine virtual worlds, blockchain, and digital ownership to create a Tamagotchi 10.0? That’s what Virtually Human Studio (VHS), the team behind ZED RUN, has been developing with digital racehorses that you can buy, own, race, breed, care for, and invest in.

Since beta launch just last year, ZED RUN has developed a strong foundation for a new type of non-fungible token (NFT) gaming. NFTs are digital assets that exist on the blockchain, a way to track and prove authenticity and ownership using the Ethereum blockchain.

It means that ZED RUN’s digital racehorses hold real value and can be traded and showcased across multiple platforms, not just within ZED RUN. “You being able to really own your digital asset, that in itself is going to change the landscape of gaming,” says Chris Ebeling, co-founder of VHS, as we talk about ZED RUN’s vision of gaming that spans across AR, VR and interactive online worlds.

Today is an extra exciting day for the company as they announce a partnership with Atari to introduce rare and collectible in-game items. This will include Atari’s games assets from Asteroids®, Centipede®, Missile Command®, Pong®, and more.

It’s indicative of a not-so-distant future where open gaming ecosystems evolve and digital assets can be ported in and out of various worlds. Let’s take a look at where this is now, and where it might go.

The first step in ZED RUN is to buy your own horse. At the moment, you can buy-in at about $40. From there, you can enter races, buy additional horses to build up a stable, breed your horse and sell the fillies or colts on the market, and even view them on the ZED AR app.

When I ask Ebeling why $40 as it’s a pretty steep entry point for a gaming asset, he explains that he wants people to start the game with an understanding that it’s an investment. 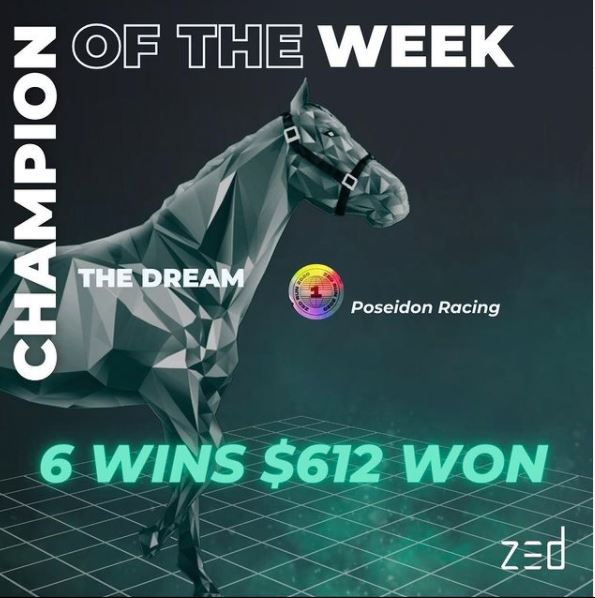 Ebeling says that horses are already being sold for over $1000, with owners collecting horses to accrue value over the long term. It’s similar user behavior when compared to CrytoKitties, a blockchain game centered around collecting and breeding digital cats. For example, one CryptoKitty that sold for $170,000 in 2018, is now back on the market for $650K.

The most expensive ZED RUN horse to date sold for around $6000 on the third-party market OpenSea, but this might all change as ZED RUN will offer an exclusive Atari Breeding Program, featuring a series of rare racehorses from which players will be able to spawn offspring for a limited time. Each of these collectible Atari digital racehorses will be auctioned off to the highest bidder.

Outside of the Atari Breeding Program, there are a few primary factors that determine the value of a digital horse. This includes bloodline (Nakamoto, Szabo, Finny, and Buterin) and genotype (Z1-Z10), which play a role in how well your racehorse will perform, its value on the stud farm, and performance on the racetrack where you can pay a small fee to run, and potentially take home the winnings that are divided between the first three horses to cross the finish line.

Atari will also contribute its cryptocurrency, Atari Tokens, as it sponsors ZED RUN races with qualifiers and main events set to a weekly schedule. This is a push to increase the utility and demand for its tokens. 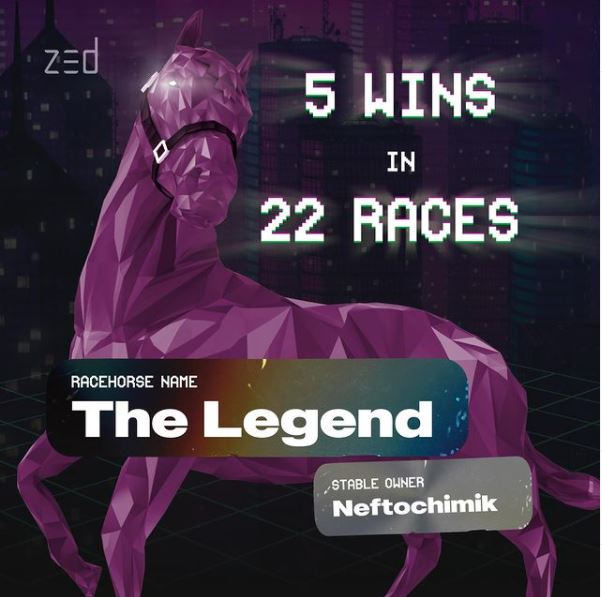 Ebeling further explains that as you progress in the game, your horse’s performance and career stats will also contribute to its value.

“When your horse wins a few races, its value will also go up. The more you race your horse, the better it is. Like a horse owner, you also have to find out what race your horse is good at. Is it a sprinter out of the gate? Is it a fast horse or does it prefer distance races? It’s all random, but based on lineages as well so you can put the pieces of the puzzle together,” says Ebeling.

“There are also racing classes based on your XP [experience points]. That’s to make sure that owners with more experience don’t just beat up on the small guys. So there’s an amateur class so people who are starting out can get a bit of momentum behind them and actually enjoy it without getting their butts kicked all the time,” he says. The Economics of ZED RUN

Ebeling describes how ZED RUN will release a limited number of horses, capping at 38,000.

“After those are sold, the rest will be bred,” he says, stating that to date there are nearly 12,000 horses in the ecosystem, and just over 4,000 have been bred.

They will also soon release a horse inspector which I was able to preview. As of now, it enables owners to view their horse up-close walking, galloping and jumping, in addition to viewing its stats and characteristics. The next iteration will be to implement more digital assets that can be bought and sold, like bridles, saddles, blankets and other horse accessories. I won’t be surprised if this tool is next to launch as Atari’s in-game assets become available across the platform.

As they roll out the tracks, this will include the ability for track owners to interface with the design of the track itself as another opportunity to create events, attract sponsors, create prize pools, and monetize from the experience.

“Now that a user owns a track, he or she can do anything they want in terms of advertisement placement, we’ve got banner flags and digital billboards,” he says.

“Our goal is to create an ecosystem where people can make a living, or at least a good amount of pocket change through their investment in the game. I think that’s the future of gaming with true ownership and NFTs,” says Ebeling. Here, our conversation shifts to how this ecosystem is evolving across digital realities, and the importance of the emotional relationship that owners can develop through AR and VR technology.

“AR is a portal for your horse to come into your world from that universe and VR is for you to step into that universe. It’s about creating a narrative with a golden thread through it that weaves the virtual, augmented, and the digital reality of the various experiences with the IP,” he says.

ZED RUN released their AR app in June 2020, enabling users to place multiple racehorses in the world around them, interact with them, check racehorse stats, and take photos. 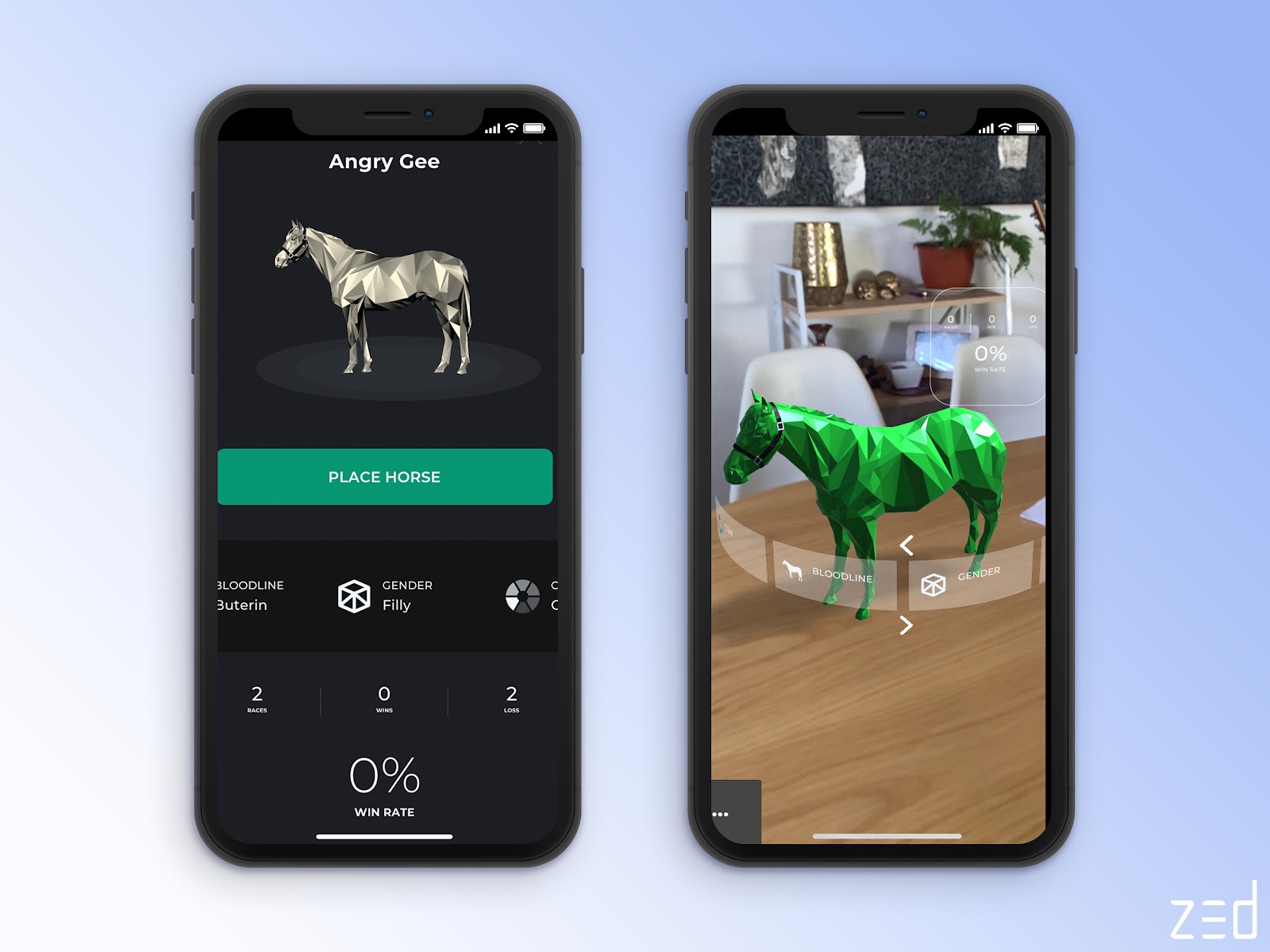 As for the next step, “[w]e’re waiting for Apple or Facebook when they come out with their specs,” says Ebeling.

“I only see AR and VR enhancing the game, creating that fully mixed reality experience where no matter what device you have, whether it’s mobile AR, VR, or desktop, you can engage.”

CEO of ATARI Fred Chesnais said on the partnership; “We see the vast potential in NFT gaming on the blockchain. VHS showcases what is uniquely possible with blockchain technology for entertainment. Working together with VHS enables us to introduce our loyal ATARI community to an exciting new game such as ZED RUN as we take steps to play our part in shaping the blockchain gaming and technology space.” 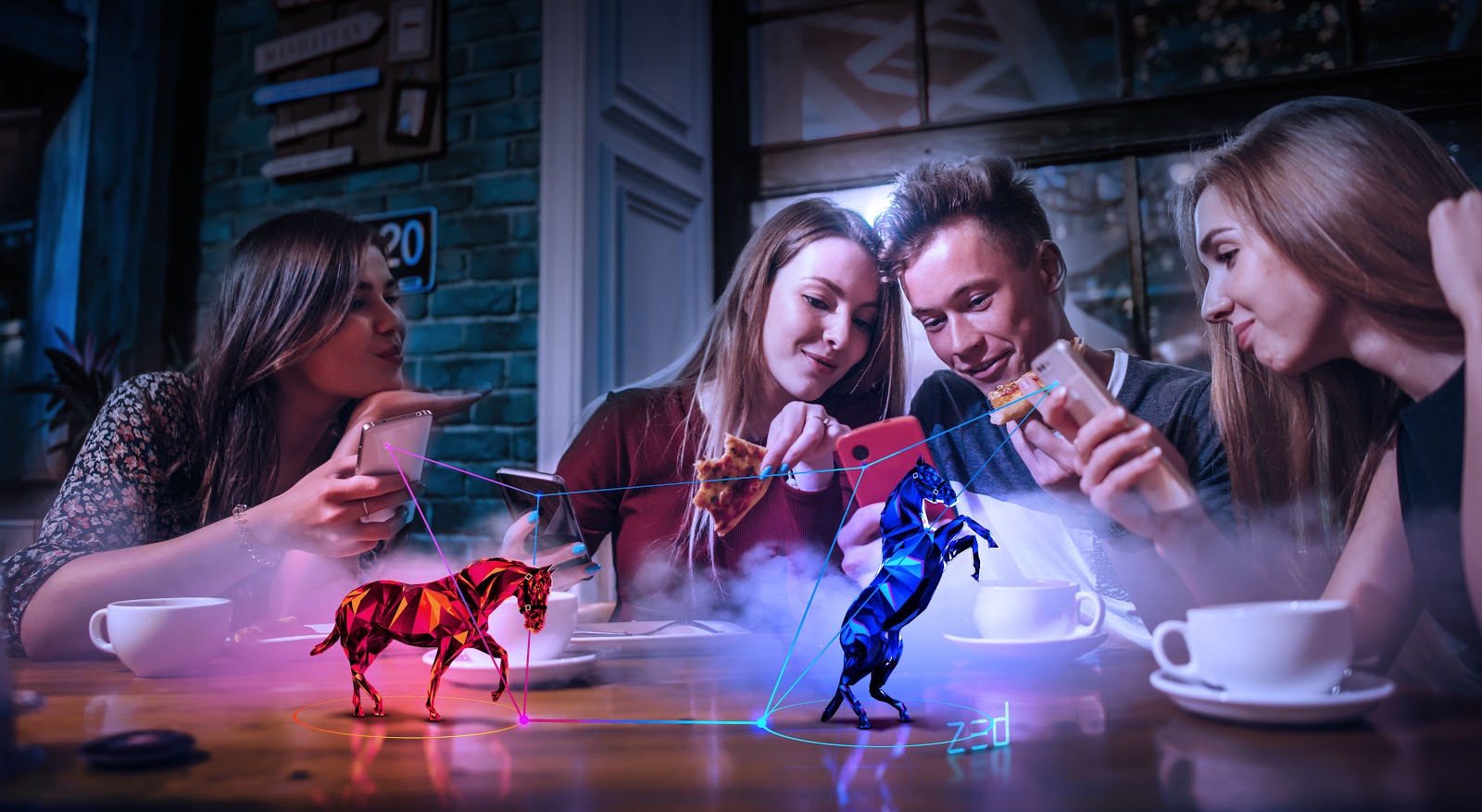 ZED RUN is a part of the growing trend of in-game digital ownership that is continuing to become more mainstream, changing the behavior of gamers and our relationship with digital assets. It’s the emergence of a new digital economy, outside of esports, where strategic NFT online, AR and VR gaming has the potential to lead to significant real-world monetization.

Some games like ZED RUN are built on this foundation, but what might happen when you take these principles and let’s say, integrate them into insanely popular games like Fortnite? Implementing true asset ownership will change the way gamers play, the importance of informed gamer communities, and third-party verified marketplaces.

It means that open ecosystems with interchangeable assets may add real value, becoming a sought-after game type that may become just as mainstream as or even a part of narrative-driven games like World of Warcraft.

When AR and VR can bring the digital into the real world, or bring you into the virtual world in a plausible and non-gimmicky manner, games and assets may take on entirely new forms of living, breathing, monetizable ecosystems.

This is an exciting time for gamers and online communities to be evolving as microcosms of what could one day make up major segments of the global economy.

If you are interested in learning more about how this ecosystem is evolving, you can check out ZED RUN’s White Paper. The company is based in Sydney, Australia.

My article was originally published in VRScout.