SUBPAC is a Toronto based company that produces tactile and wearable audio systems for a wide range of applications. John Alexiou, one of the two founders at SUBPAC, came up with the idea when he was building immersive studios. He felt that a certain physicality was missing when he started to make and listen to music, said Graham Plant, Customer Experience and Outreach Coordinator at SUBPAC.

Haptics, the key technology behind SUBPAC, generates physical feedback from sound and touch. On a day to day basis, examples of haptics that many would be familiar with include vibration feedback when typing text into a phone, and controller feedback in games and flight simulators. SUBPAC however, uses these vibrations for audio feedback with their wearable bass. 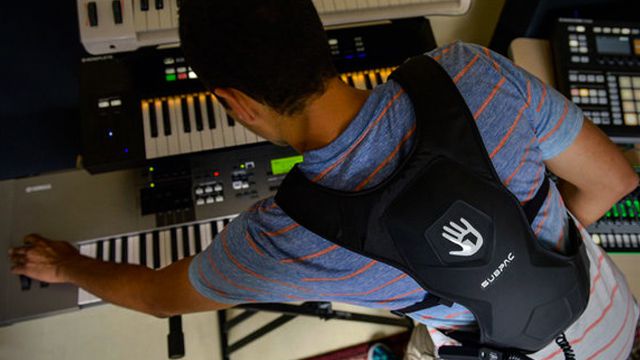 A second key ingredient to the SUBPAC, is the transducer, and SUBPAC makes their own. This is a device that converts energy from one form to another, and in this case, from sound to haptics (vibrations). “It works similar to how a speaker works,” said Plant.

To make sound, speakers push air like a diaphragm, producing sound waves that vibrate back and forth through the air. With SUBPAC’s wearable bass, the transducer is essentially a stripped down version of a speaker where the vibrations are pushed directly against the listener and their body becomes the medium for the sound to travel through instead of air.

“Your body is a resonant cavity. Think about an acoustic guitar, right? It’s just like the sound traveling through the body of the guitar,” said Plant. 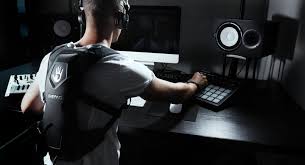 Gabe Baer, Social Media Coordinator at SUBPAC, was a touring musician and producer for ten years. In the last few years he began to use SUBPAC. As someone who chose headphones instead of speakers to listen to music, Baer wasn’t getting the same range of feeling without cranking up the volume. With the SUBPAC, he could use headphones at a low volume and still feel everything.

It’s not everyday that producers and musicians are able to test and experience their music as if it were being played at a festival, “so SUBPAC was a way to kind of bring that physicality back,” said Baer.

Can everyone at a music festival wear a SUBPAC and feel the music in this immersive way? Yes, technically it’s possible to have 10 000 people in a stadium wearing SUBPACs, but the team is working one step at a time to get it to that level. So far, they’ve worked on smaller immersive experiences of  20-30 people, including VR experiences. Applications of the SUBPAC also go far beyond live music. In my university days, the student council was incredible to organize these massive student-only festivals at an airport hanger not too far from campus. Talent from Steve Aoki to Porter Robinson and numerous others put on shows that had students attend en masse. I remember feeling quite struck at the sight of a girl signing out music lyrics for her deaf friend who could still of course, feel the music through the concrete floors. Perhaps even in the air.

“Our work with the deaf and hard of hearing has been absolutely amazing. To connect those individuals with sound and music is just so incredible,” sad Plant.

The SUBPAC team has worked with dancers who are hard of hearing and have difficulty staying on beat. “They watch their partners or they’ll try feel vibrations through the floor to make sure they’re on beat, and then when they tried the SUBPAC, they’re just like this is the most perfect thing ever,” said Plant.

One year, the SUBPAC team went to the Dominican Republic and worked with a school for the deaf there. They miked up a boat and went out on the ocean to record whales. “The whales, they make this kind of gurgling like low end sound and it was perfect for the SUBPAC. So the students were feeling the whales, and even to bring people who aren’t deaf, that would be amazing,” he said.

While most of the time sounds we hear are designed by people or come from signs of civilization such as city life, music and sound originates from many organic sources too. On another project, SUBPAC worked with MIDI Sprout, an instrument that translates biodata from plants to music.

“When we did our event in Hollywood, we had an interesting group of artists who did a few things but a piece of their performance was using MIDI Sprout, and we all at SUBPAC were feeling the plant’s music. That was really cool,” said Plant.

“I think there’s so many different ways to connect with nature and further immerse yourself into the real world using technology,” he said. In another VR experience with SUBPAC integration, the user went through four stages, each as a different insect and viewing the world as they see it. Using SUBPAC, the participant felt as if they were the insect, feeling the vibration of wings on their back.

Wearable audio systems are bringing sound closer to us, and also us closer to the world around us. From light rays that are usually invisible to the human eye (infrared), to feeling the sound of whales echo through our bodies, technology has this ability to enable us to experience the world like never before. Next up, SUBPAC is looking at more wearable devices to immerse us in the sonic world.