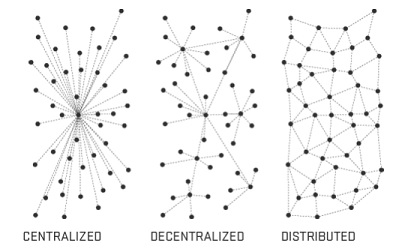 You may have seen this handy image* before. I’ve encountered it several times from one news source to the next. It explains in a few words what it means to say that the blockchain is decentralized, a peer-to-peer network.

“Clever minds quickly saw that such a set-up can be used for things other than money,” wrote The Economist in an article that explores alternative functions of the blockchain such as truth services and other ICO* project ideas.

In a nutshell the blockchain provides an open platform where data is stored in a decentralized manner, meaning that the data is stored on multiple computers that mine, or complete, blocks of calculations.

When a computer finishes the calculations, a hash is created for that block. A hash is very much like a tag that is available on Instagram. The data is also viewable in the same way. Instagram can be opened on any device, and will appear in the same way on each. Unlike Instagram though, data and their respective tags (hashes) on the blockchain cannot be edited, or if it is (hacked!), this data will show on a new hash in the system that can be used to identify a modification of the old data. This is because the data is not stored in one place, but across a peer-to-peer network of computers.

This system of decentralization is handy for transparency and simplifies the storage of data. Rather than being private or commercial, where trust must go to the holder, decentralization allows for the verification of data via open access.

But what can we learn from blockchain about our individual and collective behavior?

Clearly it’s not possible to access another’s memory, or to store it on a device, but there may be something to learn from the blockchain story. A rather rotten tomato sort of movie I watched other than for the overall moral, The Circle, demonstrated quite well the pitfalls of technology on society, but also that a good alternative can be achieved as we learn from any misgivings.

As I listened to the radio in my car yesterday (it’s too cool for tapes, and not cool enough for bluetooth), I realized that most of the hour in LA traffic passed by listening to the different possible ways Rex Tillerson found out how he lost his job, and what we should think of this. Was it via Twitter, or the White House, a phone call or an email?! It was confirmed one day after a full day of discussions that “he didn’t actually hear of his dismissal via Twitter, but was informed Friday.”

On the other hand discussion was relatively silent on what Tillerson has achieved in his position to date, the reason for his firing, information on who is his replacement and how this will affect the future dealings of the Secretary of State.

As I see it, and in more ways than just the news, our social culture has shifted from the well-being of the many to the well being of the powerful and popular.

It’s not my intent to bring pop culture into disrepute. This part of our culture is one of the may colors that are the palette of our society. The novel Ready Player One is an exceptional example of the interaction between pop culture and technology, but it also adds a third factor of values.

This new burst of blockchain technology presents an opportunity to reassess our values, and to measure how these values we see on the blockchain are represented in today’s social structure.

We’re already well into globalization, but I argue that the term is still in its infancy.

The development of ICOs and the coins that fuel them, powered by the blockchain, have created this fantastic arena for innovation, discussion, assessment, collaboration and consumption in an entirely new and transparent way.

ICO documents are publicly available  for review, and public scrutiny is even encouraged. It’s no longer unsafe to propose a structure or idea of massive scale that also proposes radical change.

A trickle down effect from our values on the blockchain to our basic values, interactions and institutions such as schools, courts, police services and political entities would be the beginning of a new world that shifts power back to the whole rather than the parts. Or, to the individual as opposed to the state in a way where we are encouraged to look after each other.

Teamwork, collaboration, the sharing of work and ideas, constructive critique, boldness in imagination: I don’t remember these presented in the classroom days in a way that I now see accessible via the blockchain and ICOs. As we all know, groups don’t work for everything, but collaboration is also about the sharing of ideas to inspire on an individual level.

Satoshi Nakamoto, the pseudonymous and unidentified creator of bitcoin, has shown the effect of the power of one and the positive effect of the work of one can have when a different view of society is shared with the world and a tool is created for the construction of this idea.

In a way that fits with the current model, we now have the tools to rework the old.

Can the hot tub time machine take us to a future where power has shifted from a central government to a self-sovereign individual in a global nation?

I think back to Lockes’ social contract*, and towards a new type of smart contract* if you will.

One for the many, and the many for each and every one.

*image- original source not traceable on the blockchain